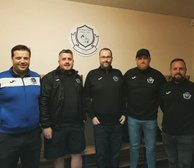 We are delighted to formally announce Ashley Payne as the clubs new First Team Manager.

Ashley joins the club having been in charge at Oxfordshire Senior League Premier Division side Launton Sports for the last five years, who look set to achieve a 4th place finish this season.

Also joining the club as part of the management team is Paul Clark, Jamie Davies, Peter Gregor, Gareth Partlett, all of whom worked with Ashley during his time at Launton.

Chairman Matt Hawes said "We are really excited to welcome Ashley and his management team to Buckingham United. Ashley's energy and passion for the game was clear to see and we are delighted he has accepted the offer to become the clubs new First Team Manager"

Further details relating to pre-season will be announced in due course.